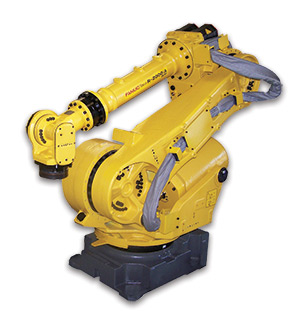 For over 30 years, the Robot Company has served the owners of FANUC robots in industries worldwide with new and reconditioned parts for FANUC robots. We are also your source for the repair of FANUC robots, servicing a wide range of circuit boards, motors, amplifiers, and FANUC teach pendants. FANUC robots are used in a variety of industries including:

Take advantage of savings on replacement parts for FANUC robots such as RV reducers, cables, and wiring harnesses, castings, wrists, and other mechanical parts. We also have an extensive inventory of used FANUC robots, and can offer you a reconditioned robot for moderate cost. We work hard to gain the confidence of robot owners and buyers. We will always strive to give you the best quality parts, repairs, and service for FANUC robots.

The Robot Company has extensive experience working with FANUC Robotics, the company known for the development of innovative robotic technology. FANUC (Factory Automatic Numerical Control) Robotics was founded in 1982, and is one of the world’s leading manufacturers of industrial robots. The most widely used applications include:

FANUC robots are customizable and programmed to meet the exact needs and specifications of each customer.

Dedicated to Supporting the Owners of FANUC Robots